Finding your line: Motorbikes with a difference

There are plenty of motorcycles on the market, and they've each got their own ups and downs. Some are more similar than others, and these are the sorts of bikes that don't appeal to the truly individual rider out there who is looking for a machine with a little something different.

Nobody wants to see a bike sitting on the street that looks just the same as the one next to it. Your ride should stand out and be personalised, it should be a reflection of who you are and translate that onto the road perfectly.

That's why the three bikes below are so special. They're not only very different from each other, but they have a huge amount of character that's going to appeal to any rider with a sense of style. They're all right at your fingertips with Motorcycle Finance With AAA as well, so the dream isn't too far away.

A photo posted by Indian Motorcycle (@indianmotorcycle) on

The Indian brand is steeped in legend. It's had a movie made about it, and the designers never fail to impress when bringing something striking to the market.

The Indian Chief Dark Horse is a bike that takes the classic shape of the Chief and then adds the suave charm of matte black finishes all over the place. It's also got a serious motor, and the roar from the exhaust will excite everyone you ride past.

Of note is the black Thunder Stroke High Flow Air Cleaner. As expected, it's made into a feature by the team at Indian, but it also serves an important purpose. It allows more air, and cleaner air, into the V-Twin motor, so that it can continue to perform at higher levels for longer. Pair it with the Stage 1 exhaust system to really blow yourself away when you decide to pull the throttle hard. The throaty note leaves little to the imagination.

For a better street presence, you'll be presented with 16" Ape Hanger handlebars, which will make you look super cool riding around, no matter what your preferred riding style.

Many people know the Triumph brand, and many people ride the smaller models. But the Rocket III takes everything one step further, in terms of styling and the performance, and you won't find too many around.

It's not a superbike with speed off the line, nor is it a massive touring bike that struggles in the turns. It's a fantastic combination of both, with unique design and comfort to suit all stages of rider.

It comes equipped with a massive 2.3-litre block, and Triumph claims that while idling, it has as much, if not more torque than any superbike at the high end of the rev limiter! While it sounds like a big claim, there's not much this bike won't do performance-wise. It's also a shaft drive, which means it's going to run forever and ever, with only service intervals taking it off the road for any period of time. Good luck breaking this beast!

There are still the traditional throwbacks on this bike, with the twin headlights at the front, but it's mixed in with modern technology for even more control. There are advanced ABS brakes to keep you on the road safely at all times, and with all of the power coming from the engine, that's a necessary addition.

The Rocket III is a bike that has to be seen to be believed, and when you do sit on the back of it, you'll want to get yourself one as soon as possible.

Ducati always produces bikes that scream for attention. They look aggressive and powerful, and then as soon as they start up, they really turn heads.

That is even more amplified with the Ducati XDiavel. It looks totally unique, genuinely like nothing on the market, and the single-seat setup creates a gorgeous silhouette for anyone riding it. When you head past some reflective windows, just take a look at yourself gripping the handlebars and you'll know that this is the bike for you.

A 1,260 cc engine sits under the rider, and it produces 115 kilowatts of power and a significant 129Nm of torque. When it screams, it roars. That's thanks to twin oval exhaust tips that exit from the side of the bike, and are a part of the stainless steel catalytic system.

As a Ducati, you'll know that the XDiavel has the power to propel you to whatever speed you want, and you'll feel like you've had your breath taken away as soon as you shoot off the line.

These bikes are calling for you, and getting into one is as simple as taking out a motorcycle loan to help you with the finance side of the purchase.

Get in touch with AAA Finance today and start your journey toward owning a very unique and individual bike right now. 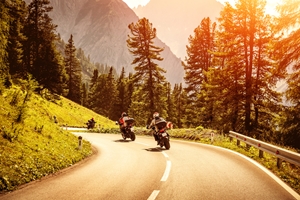 3 famous riders to replicate with a motorcycle loan

What are the best dirt bike locations in Australia?

Benefits of an off-road motorcycle

Why are so many Australians using motorbikes?