Where should you take your new caravan?

Buying a caravan is a series of decisions. Some are easy, like where you should go to get easy camper trailer finance. Others, unfortunately, are less clear cut, like the destination for your new vehicle's maiden voyage.

It's a tough choice to make in any country, let alone one with a landscape as expansive and diverse as Australia's. Could a trip to the Blue Mountains be a good start to the journey? What about the beaches of the Sunshine Coast? The options can seem as endless as the Outback.

So, we've compiled a list of places where you can christen your new caravan. Here they are:

If there's anything better than driving along a coastal road, we haven't found it. This shining example begins outside Melbourne and shapes east to finally finish in Warrnambool.

However, unlike other forms of holidaying, caravanning is more about the destination than the journey. In this respect, The Great Ocean Road doesn't disappoint. Not only is there the Great Ocean Walk to go with the road, accommodation provider Turu named the Great Ocean Road Tourist Park as the best caravan park in the country.

If you've got a new caravan in Victoria, why would you go anywhere else?

While Australia is known for being hot, dusty and full of deadly animals, the country still has some surprises for those who think they've seen it all.

Existing in contrast to the rest of the country, the Blue Mountains are a far cry from the heat of the outback and offer a unique range of activities for caravanners to enjoy, from bush walks to rock climbing.

It's also only two hours out of Sydney, so it's a great start for people new to the world of caravanning.

It would be unfair to only focus on Australia's east coast, so here's an option for those on the other side of the country. Broome resides on the state's coast, and isn't far from the beautiful Dampier Peninsula.

It might be a trip for the more dedicated caravan enthusiast however, as it's a fair way out from any major population centres. Once eager travellers have made the trip, there's plenty of ways to while away the time in Broome. Overnight, Turu recommends the Peppermint Park Caravan Park, which leads the state as far as its concerned.

If you need further help exploring the country, a secured personal loan from one of our 23 lenders could be just the ticket. 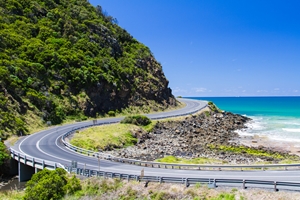 The most scenic camper trailer campsites in Victoria

Why surfers and caravans are a match made in heaven