More and more Australians cruising through their holiday

Feel like you need a little time to unwind? Maybe it's time to hit the deck of a cruise ship.

A recent report from Roy Morgan shows that cruises are quickly growing in popularity among Australians. In the 12 months leading up to June 2014, 10.7 million Australians treated themselves to a holiday of three nights or more. Out of these, 480,000 people chose to take a cruise on their most recent trip.

And the destination of their adventure? Anywhere but Australia, according to the numbers. Out of those in the mentioned category, 71.5 per cent travelled to overseas locations on their cruise. The South Pacific took the crown as the most popular region to travel to (19.1 per cent), followed by Europe (16.4 per cent).

These stats might not be surprising to some. After all, what's not to love about a cruise? These ships give the unique opportunity to experience multiple destinations and cultures, while doing it with premium comforts, culinary offerings and recreational activities at your fingertips.

Cruise services like Royal Caribbean International, for instance, boast a family-friendly experience that offers world-class dining, an award-winning youth programme and even entertainment to the likes of full-scale Broadway productions.

Cruise Critic also points out that planning a cruise holiday is far simpler and easier than planning any other type of trip, making it one of, if not the most relaxing ways to spend a week away.

If you're not sure you have the finance for a cruise, get in touch with AAA Finance and we'll sort you out with a personal loan. 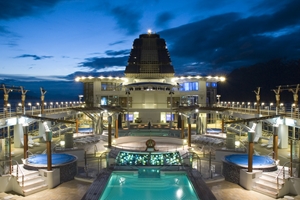 Cruising into Easter with car finance

Where will holiday finance take you in 2016?

What are Australians looking for in a car?