Just how much speed could a Sea-Doo do?

With spring properly underway, it gives a reason for people to get more and more excited.

In just a few months, we'll be seeing the return of sunbathers on the beach, beaming afternoons and eager Australians hitting the cool waters everywhere. That's right, we're talking about summer.

While the sunny season might still be a few months away, it's never too early to start dreaming about what you're going to do.

If you like smashing the waves at blinding speeds over the sunny season, this might whet your appetite for a boat loan.

The Ferrari of jet-skis

Mansory, a German company that specialises in luxury-car modifications, has recently revealed a stunning, state-of-the-art Sea-Doo that has everyone picking their jaws up off the floor. Called the Black Marlin, this jet ski is an absolute beast in power, boasting a 550 horsepower engine. That's more raw strength than you would find in many sports cars.

More impressive is the fact that the machine is made out of carbon fibre, which is both durable and light. Clever use of this material has allowed Mansory to cut 10 kg off its total weight.

The Black Marlin has a sleek and aggressive design that shares more of a resemblance with fighter jets than sea-craft, and would make any speedboat enthusiast stare.

But this jet ski isn't all looks and power. It's a dream to ride as well, with hand-crafted seats made out of a unique, pseudo-leather resistant to seawater.

Now isn't this a machine that will make your summer just that much sweeter?

While this wave-rider isn't available in Australia just yet, it sure is good to dream about. If there are other jet skis and boats that you'd like to speed across the sea with, be sure you have the right boat finance. 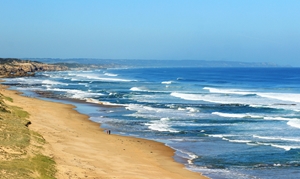 What to look for when buying a used boat

Want To Grow Your Business? Then Consider Small Business Finance

Did the Sydney to Hobart yacht race make you want a new boat?