Australians love cars of all shapes, sizes and ages. However, while some will be focused on what new cars could offer, others know that there's just as much excitement to be had with a classic - or simply older - vehicle.

Thankfully, a car loan from AAA Finance is not just for the latest and greatest vehicles sitting on the showroom floor. Instead, people looking to secure a bona fide classic, a special vehicle from their youth or a car whose reputation speaks for itself can find a finance solution that gives them the power to choose.

The virtually infinite range of classic cars available to buyers makes it almost impossible to pick a list that will speak to all people. Nevertheless, here's three options that are worth much more than the sum of their parts.

Australia has a proud history in the automotive manufacturing sector, with marques such as Holden and Ford spurred on by the battle for supremacy on the country's race tracks.

Back in the day, many of the vehicles which took to the track weren't too far removed from their road-going counterparts, so race fans with a bit of extra cash could snare themselves a genuine motor-racing icon.

Not only are these cars an important piece of Australia's automotive history, many are actually increasing in value. Desirable options such as the Ford XY Falcon Phase III GT-HO have sold for hundreds of thousands of dollars at classic car auctions, marking them as cars with serious investment potential.

While Japanese cars have always been well-regarded for their exceptional reliability, few vehicles have been put through the same tests as the poor old Toyota Hilux the presenters from Top Gear got their hands on.

By some minor miracle, the two episodes' worth of torture and torment - which included being left underwater overnight and dropped from the roof of a building - weren't enough to kill the vehicle, resulting in a dependable work ute of epic proportions.

Drivers looking for a reliable vehicle for their small business should look no further.

3. Jaguar E-Type - The most beautiful car in the world?

Considered by many to be the prettiest thing crafted by the human hand, the Jaguar E-Type represents the golden era of automotive design. Serious buyers will need expensive car finance to ensure they're able to get their hands on one, however, with Hagerty revealing that prices are on the rise.

Enjoyed the beautiful 63' #Jaguar #Etype 3.8 during the last #ride of this year. https://t.co/Edac9AsQkb pic.twitter.com/6Hpf3Xp2rk

Sure, a new Jaguar might be both faster and safer, but has any car ever looked as good as an E-Type?

Contact the team at AAA Finance using our quick loan enquiry option on the sidebar or by phone to secure your next vehicle. 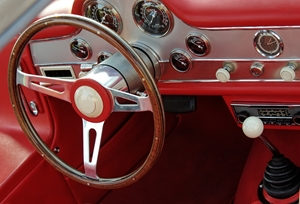 3 new cars to watch out for this year